The Emirates plan to live on Mars 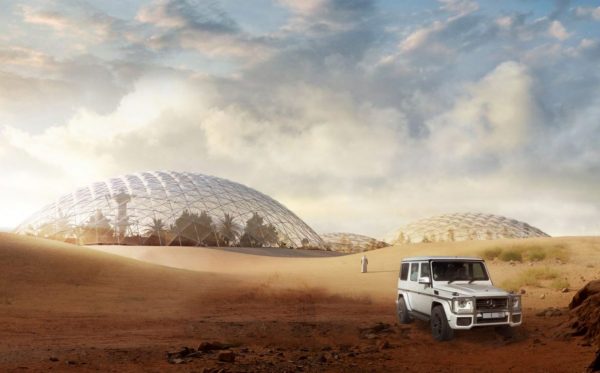 In 2017, the Emirates revealed plans to build cities on Mars. It may take four or five generations of scientists to achieve it, each one improving the previous generation’s blueprints as research continues and plans evolve. And I guess Emiratis will be giving the world’s richest man Elon Musk a run for his money as he plans to send a mission to Mars in the next decade. In 2014 we reported that the Emirates wanted to send a spaceship to Mars by 2021, one of their ambitious goals about to be achieved.

Like California City, envisioned as home to a Mars research station and Mars City basecamp by Vera Mulyani, The desert surrounding Dubai provides an ideal testing ground. Barren and dry as Mars itself, there’s plenty of room there for the Mohammed Bin Rashid Space Centre (MBRSC) to establish a project that covers 176,000 square meters. It’s called Mars Science City, and its current budget is estimated at $135 million.

The architects Bjarke Ingels Group have submitted plans for a prototype Mars Science City to be tested in the Emirati desert. To achieve this first stage, they analyzed the challenges that the hostile Martian environment presents to humans, and conceived solutions for overcoming them.

The first challenges are avoiding the powerful radiation that pierces Mar’s thin atmosphere, the low gravity, and creating an artificial temperature that permits human life. The normal Martian temperature is  -63°C (-81°F); a tad chilly for sustaining life. Given the scant air pressure due to the thin atmosphere and low gravity, fluids transform to gas quickly, such that an unprotected person’s blood would boil away.

Other challenges will doubtless arise to be dealt with, but the architect Bjarke Ingels Group has already proposed detailed plans for living on Mars.

In an interview with CNN, Jakob Lange, partner at Bjarke Ingels Group, gave a picture of how the artificial city would be made habitable. People would live inside of pressurised, oxygen-filled biodomes covered by transparent polyethylene. The oxygen would be made by passing electricity through ice stored underground.

Solar energy would power and heat the city, taking advantage of the thin atmosphere to maintain a comfortable warm temperature.

Lange explained, “Since there is very little atmosphere on Mars, the heat transfer will be very low, meaning that the air inside the domes will not cool down as fast as it would on Earth.”

Buildings would be constructed of red Martian soil and 3D-printed. Rooms 20 feet long would be built underground as insurance against radiation, dust storms, and meteor crashes. Light would filter in from water-filled skylights with living fish swimming inside them.

“In the future on Mars, you would have skylights in your underground cave that would be like aquariums,” said Lange.

Our great-grandchildren, can expect to see other fantastic forms of buildings on Mars, which has only one third of Earth’s gravity.

“… which means that you can suddenly make columns that are … slimmer and longer,” Lange said. “It creates almost like a completely new rule set that you have to follow when designing architecture in space.”

This brings to mind the covers of sci-fi magazines from the 1960s showing spacecraft hovering over tall, many-turreted buildings, and a huge pockmarked planet glimmering in the background.

Looking even longer into the future, it’s hoped that as the Martian population grows, biodome villages will be built and eventually join to become cities.

The earthly model for the Mars Science Center will be 3D-printed from desert sand and its domes will not be artificially filled with oxygen. But there will be water skylights and solar energy will power it, as projected for the building on Mars. It will contain rooms for a school, a museum, and office spaces, as per the Martian plans. Israelis show us a prototype of a 3D printed home they created for living on Mars.

Vera Mulyani in California is also building a Mars City.

Past testing grounds for space missions include Antarctica’s Concordia Station, California’s Mojave Desert, where NASA tested Mars rovers, and the Moroccan Sahara, where the European Space Agency created a Mars analog. But the MBRSC hopes that in the future, Mars Science City will be the foremost facility for testing conditions on Mars.

“This is going to be our platform where we can develop the science [and] the technology that will help us in our future missions to Mars,” said Adnan AlRais, Mars 2117 Program Manager at MBRSC. “We want to come up with a totally new facility that will help the international community.”

MBRSC hasn’t given final approval to a design for the Mars Science Centre, nor settled on an architect. They are developing a budget for the project and determining how much desert space it would need.

The MBRSC’s space program has been active since 2014. They have sent an astronaut into outer space (September of 2019) and launched a probe to Mars in July 2020. The probe is named Hope and is expected to return in February of this year, loaded with data on Martian conditions.

More plans are to send an Emirati crew member to the international analog mission in Russia that’s to test the effect of isolation and confinement on mental and physical health. The project will take place in November of this year, and will last eight months.