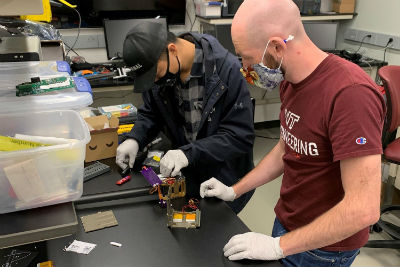 Few students have the opportunity to design, test, and build a satellite and see it successfully launched into space. A group of Virginia Tech engineering students are one step closer as their satellite, the “ThickSat,” has been delivered for space launch qualification testing before being integrated onto the rocket for launch.

What began as a conceptual senior capstone design project for a group of aerospace engineering seniors two years ago has since been expanded and developed into a complex piece of hardware bound for low-Earth orbit. Once cleared for flight, the completed satellite will fulfill its mission when it launches into space aboard the Cygnus NG-15 spacecraft, scheduled for launch in February 2021.

“This project is providing students at both the undergraduate and graduate levels the unique opportunity to design, develop, test, and monitor their own experimental payload, and see it successfully launched into space,” said Jonathan Black, professor in aerospace and ocean engineering, co-director for the Center for Space Science and Engineering Research (Space@VT), and director of the Aerospace and Ocean Systems Lab at the Hume Center at Virginia Tech. “Throughout the process, they are gaining critical skills in spacecraft systems engineering and space science that will complement what they are learning in the classroom.”

At Space@VT, Virginia Tech’s ThickSat was developed by a large team of undergraduate and graduate students from across the College of Engineering and the College of Science over the past two years.

The path from design concept in the classroom to outer space is rooted in the ThinSat program. The initiative, a collaborative effort between the Virginia Commercial Space Flight Authority (also known as Virginia Space), Twiggs Space Lab, Northrop Grumman Innovation Systems, and the NASA Wallops Flight Facility, seeks to increase student engagement in STEM-related fields and democratize the public’s access to space. Through the low-cost, short-term missions, students gain hands-on experience in the development of a small satellite no larger than a slice of bread.

Professor Kevin Shinpaugh encouraged student participation in the ThinSat program as part of his space vehicle design course, a year-long senior capstone design experience in the Department of Aerospace and Ocean Engineering.

According to Shinpaugh, the plan was to design a satellite during the first semester, complete a quick build and test with a low-altitude balloon flight prior to delivering the final space flight payload in the spring. The undergraduates designed and built a prototype but delays in the test phase occurred, and as the seniors graduated and departed Virginia Tech, a group of Space@VT students picked up the project where they left off.

Eager to see the project through to completion, the undergraduates passed the project on to a team of multi-disciplinary graduate students as an extracurricular project at Space@VT. Expanding upon the undergraduates’ conceptual design and mission, the team of graduate students worked to build a more complex satellite within the restrictive constraints of the ThinSat model. The team combined six individual ThinSat trays to create a bigger, more capable ThickSat.

“This project is unique in that it really extends the capability of traditional ThinSat,” said Shinpaugh. “With the combination of multiple trays, the final hardware looks more like a cubesat while utilizing the communications and power systems of a smaller, thinner satellite.”

Virginia Tech’s satellite will test a composite boom for the NASA Langley Research Center as part of the development of the next generation of ultra lightweight deployable boom technology. The experiment and testing of this boom, which can physically extend and support a range of small satellite deployable systems, serves to act as a risk reduction pathfinder for future spaceflight missions such as the Advanced Composite Solar Sail System (ACS3) mission, and demonstrates rapid, low-cost efforts to get new technology designed and flown, resulting in a cycle of continual improvements.

Virginia Tech’s completed flight unit was recently delivered to the Near Space Launch in Upland, Indiana, where it will undergo space launch qualification testing to ensure the hardware can withstand launch and deployment in the space environment. The ThickSat, along with dozens of ThinSat projects from other university and high school teams, will then be integrated into a canisterized satellite dispenser and prepared for launch. The payloads will be transported back to the NASA Wallops Flight Facility and attached onto the upper stage booster on the Cygnus NG-15 and launched into space.

The NG-15 is the 15th planned flight of Northrop Grumman’s robotic resupply spacecraft to the International Space Station and is scheduled for launch on the Antares rocket from the Mid-Atlantic Regional Spaceport at Wallops Island, Virginia in February 2021.

After the Cygnus spacecraft separates from the rocket, the canisterized satellite dispenser will open up and disperse the satellites at the edge of the Earth’s atmosphere, in the region known as extreme low Earth orbit. The satellites will collect data or perform their intended missions for about five to seven days before burning upon re-entry into Earth’s atmosphere.

Virginia Space, Twiggs Space Lab, and Near Space Launch are providing a space data dashboard to ensure all schools can view their data. Confirmation for mission success of Virginia Tech’s satellite will be achieved via pictures taken from the on-board camera or optical encoder sensor data from deployment.

Since the ThickSat project’s inception, approximately 25 Virginia Tech undergraduate and graduate students have had a hand in this mission as part of a much larger cross-institutional team. Students from aerospace engineering, mechanical engineering, electrical and computer engineering, computer science, and physics have worked together to make the mission a reality.

Over the course of the project, students have benefited from financial and in-kind support from NASA Langley Research Center, The Virginia SmallSat Data Consortium, and industry advisors. More importantly, the hands-on experience they’ve gained with coaching support from faculty and the dynamics they experienced working on specialized teams will prepare them for internships and career opportunities in aerospace-related industries.