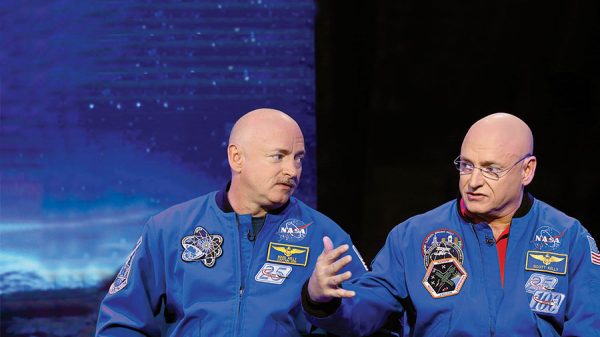 A group of researchers has studied the effects of space traveling in humans, with the use of an unconventional method called the Twins Study. It consists of analyzing two identical twins data during a whole year, with one brother in space and the other one on Earth.

Scott Kelly spent 340 days in the International Space Station (ISS) while his brother, retired astronaut Mark Kelly, was on Earth the whole time. This methodology has allowed scientists a distinct approach to the effects that space traveling has on persons. The preliminary results were presented last week in the annual Investigator’s Workshop for NASA’s Human Research Program. Both Scott Kelly and Russian cosmonaut Mikhail Kornienko returned to Earth last March, after accomplishing the one-year long mission.

One of the primary objectives of the researchers was to observe the gene variation that both brothers could have experienced after one year of study. Scientist groups have proved in the past that 6 months in space could have adverse effects on a person’s health, as it can stretch the spine, shrink the muscles and alter the sleep cycle.

No previous investigation has focused on the implications that space travel has on the human body when a mission lasts more than 6 months. Researchers are looking forward to the results as the conclusion they could present will have repercussions on the plans regarding future deep-space missions.

“The preliminary results from the year-long ISS expedition and the associated Twin Study have not identified any show-stoppers for longer human spaceflight missions,” NASA Human Research Program chief scientist John Charles said in a statement. “Some of the results, such as the unexpected increase in telomere length in Scott Kelly, require additional analysis and correlation with the results of other investigators, and may prove to be an artifact or transient change.”

How different is life on Earth and in space?

There are as most as 10 different research teams analyzing all the information from both of the participants of the study, the Kelly brothers. Several teams are in charge of analyzing specific data like changes in the immune system, bone formation, and DNA alterations.

Regarding DNA analysis, researchers are trying to define if the dubbed “space-gene” activated during the time that Scott was in space. They sequenced the DNA and RNA from the twins’ white blood cells and discovered that there are hundreds of mutations that are unique to each brother. The team found that almost 200,000 RNA cells showed themselves differently in each twin.

The results of the study revealed that Scott’s mutations and chemical modifications in his DNA were less than when he returned to Earth. Mark’s measures also presented variations during the time of the study. The researchers established that this proved the human gene’s susceptibility when facing an environment change, in Earth or space.

All the findings are preliminary as there is no conclusive information that can explain why there were distinct gene mutations or a telomere enlargement in Scott’s case, during the study time lapse. An in-depth report is expected this year, as well as the summary of all the research teams working on the subject.