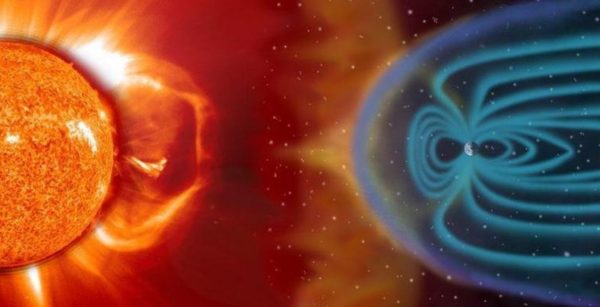 The Earth’s magnetic field, which protects life on our planet by blocking the majority of harmful solar radiation, is mysteriously weakening in specific locations.

Over the last two centuries, it has lost nearly 10% of its strength, leading some to speculate that a multi-century pole reversal has begun. What’s more, scientists have identified a large, localized region of weakness extending from Africa to South America, along with a second ‘center of minimum intensity’ southwest of Africa – both of which are allowing charged particles from the cosmos to penetrate lower altitudes of the atmosphere – throwing off satellites flying in low-Earth orbit, according to Sky.

Known as the South Atlantic Anomaly, the field strength in this area has rapidly shrunk over the past 50 years just as the area itself has grown and moved westward.

Over the past five years a second centre of minimum intensity has developed southwest of Africa, which researchers believe indicates the anomaly could split into two separate cells. –Sky

According to scientists from the Swarm Data Innovation and Science Cluster (DISC) at the European Space Agency (ESA), measurements from their ‘swarm satellite constellation’ have shed tremendous light on the second anomaly.

In fact, the anomaly had puzzled ESA researchers as their Swarm satellites would sometimes ‘black out‘ when flying through the affected region. Three years ago, they observed a link between the blackouts and Ionospheric thunderstorms.

“The new, eastern minimum of the South Atlantic Anomaly has appeared over the last decade and in recent years is developing vigorously,” said Dr. Jurgen Matzka of the German Research Center for Geosciences. “We are very lucky to have the Swarm satellites in orbit to investigate the development of the South Atlantic Anomaly. The challenge now is to understand the processes in Earth’s core driving these changes.”

If this is the beginning of a pole reversal – which happens roughly every quarter-million years, it would result in multiple north and south magnetic poles all around the globe during the multi-century phenomenon.

“Such events have occurred many times throughout the planet’s history,” said ESA, adding “we are long overdue by the average rate at which these reversals take place (roughly every 250,000 years)”

Not to worry, in theory, as the space agency says that the South Atlantic dip which they’re still learning about was “well within what is considered normal levels of fluctuations.”

For people on the surface the anomaly is unlikely to cause any alarm, but satellites and other spacecraft flying through the area are experiencing technical malfunctions.

Because the magnetic field is weaker in the region, charged particles from the cosmos can penetrate through to the altitudes that low-Earth orbiting satellites fly at.

“The mystery of the origin of the South Atlantic Anomaly has yet to be solved,” added ESA.

However, one thing is certain: magnetic field observations from Swarm are providing exciting new insights into the scarcely understood processes of Earth’s interior. – Sky